How Trending Is Mayor Rody Duterte in Social Media?

Days after his comments on threatening to kill criminals and not running for president, Davao City Mayor Rodrigo Duterte continues to be a trending topic in social media. Many people are putting their hopes on Duterte being the next president of the Philippines, and his recent quotes and interviews are really boosting his online popularity.

But just how popular is Mayor Digong in social media? 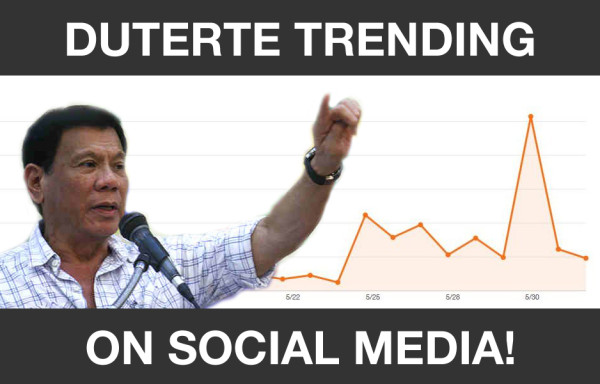 To answer this, we checked into three popular social media analytics tools to assess the popularity level of the term “duterte”. We discovered some very interesting results, which are all found below.

Topsy, a popular Twitter analytics tool revealed a fairly steady use of the term “duterte” at the start of May 2015, averaging by few hundred tweets a day. However, the term surged to popularity starting in May 24 when ABS-CBN tweeted the headline “Duterte admits links to Davao Death Squad”. That day alone generated 2,365 tweets mentioning Duterte!

The mayor’s highest trend status last month was on May 30 (at 5,374 mentions on Twitter) after his interview with GMA’s Jessica Soho.

As Duterte’s name gets tossed into the pool of potential presidential candidates for the 2016 national elections, we compared the trend graphs of “duterte” and “binay” to get a preview of the showdown between Duterte and VP Jejomar Binay in the presidential derby. Check this out!

The graph shows how Binay has been riding the high seas of Twitter feeds for the past weeks, but Duterte is definitely gaining ground. If Digong continues with his reverse psychology of a campaign strategy, I bet the Twitter tides will turn towards his advantage. 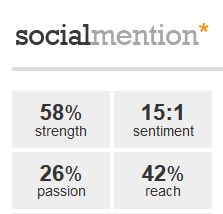 This social media analysis application monitors trends in real time, and it seems that it has picked up on our mayor’s scent. According to Social Mention as of June 3 at 12:00MN:

Online search giant Google reports a gradual increase in the number of search queries for the keyword “duterte” for the past 30 days. Although the graph does not reveal the exact number of keyword queries for the search term “duterte”, it clearly shows the rise in interest for our beloved mayor.

A Duterte vs. Binay showdown reveals the same progression. While the term “binay” is more frequently entered in search queries for the first few weeks of May, the tables have turned on the last week of May, in favor of the term “duterte”.

Semi non-related note: Casting the net wider, I noticed that there was a noticeable uptick in “duterte” search queries on July 2011. Upon tracing, I learned that this was the time when then-mayor Inday Sara Duterte was in the news for punching a sheriff after not relenting to her request for a two-hour delay in a demolition order.

If the rising popularity of Mayor Duterte is any indication of his standing in the upcoming presidential race, then the 2016 Philippine elections will be a very exciting event to participate in.