In the recent Connected Davao event simultaneously held in SM Lanang Premier, NCCC Mall, and GMall Davao, mallgoers got first dibs on affordable, mid-range, and premium LTE devices. One of the featured handsets was the O+ Presto 700, which can use the 700 MHz frequency band for LTE, available at a special price of P2,188.

Other LTE devices snapped up were from Samsung, Alcatel, Asus, Huawei, Lenovo, Starmobile, Oppo, and Apple.

Smart has promised to bring a wider variety of LTE devices, running on multiple frequencies, so that more Davaoeños could enjoy the network improvements in the area. LTE is the fastest wireless data service that is commercially available.

Smart is boosting LTE coverage in Davao City and surrounding municipalities by tripling its LTE-capable sites by the end of the year. This is part of Smart and parent company PLDT’s three-year plan to cover 95% of the country’s cities and municipalities with LTE service by end-2018.

The rollout plan submitted to the National Telecommunications Commission last July includes the use of spectrum that Smart has gained access to under a co-use arrangement, as a result of the acquisition of the telecoms business of San Miguel Corporation by PLDT and Globe Telecom last May.

So far, Smart has fired up eight 700 MHz-powered sites, five of them in Davao City. These are in Matina, in Barangay Ma-a near DBP Village, along San Pedro Street near Osmeña Park, at the PLDT building along Ponciano Reyes St., and at Kilometer 4, near the Davao City Golf Club.

In the Matina cell site, Smart combined its 700 MHz and 1800 MHz frequency bands using carrier aggregation, resulting in peak speeds of up to 200 mbps.

“Davao City continues to grow in importance as a major trade, enterprise, and tourism hub in Mindanao. In line with this, we are expanding the capacity and coverage of our network here, particularly for mobile data,” said Ramon Isberto, head of Public Affairs at PLDT and Smart. 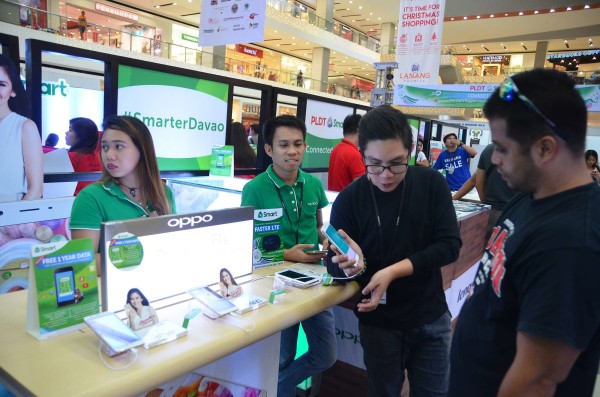 The Connected Davao event also featured affordable data subscriptions, such as Smart GigaSurf 50. This enables subscribers to use 1 GB of mobile data plus 300 MB for streaming, for three days.

“We have a multipronged approach to giving Davaoeños a better mobile internet experience. First, we are improving our network. Second, we are making available more LTE devices so they could enjoy the benefits of the enhanced network. Third, we are offering value-packed data subscriptions,” Isberto said.

“On top of these, we deployed a customer education team in the Connected Davao event to answer subscribers’ questions on mobile data, and give tips on how to maximize their internet experience,” he added.

The simultaneous mall events also featured interactive exhibits where guests got to experience the connected life – at home, outdoors, in the office, and in school – that PLDT and Smart’s internet services enable.

Text and Image from SMART

AOC ranked #1 in the PC monitor market in terms of unit shipments in the Philippines for the second quarter of 2020.