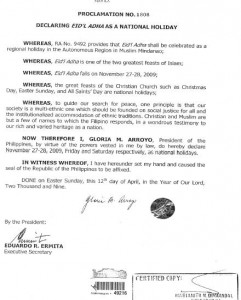 I found this Free PDF Search engine that offers easy lookup of PDF documents, and so I decided to give it a try. As I typed in “Proclamation 1808” in its search box, it gave me exactly what I was looking for – Proclamation No. 1808 in PDF. And indeed, Proclamation No. 1808 has declared November 27 and 28, 2009 as national holidays and it was signed by the President of the Philippines, Gloria Macapagal Arroyo, on April 12, 2009.

I am not completely sure why the sudden change, but it would have been far better if they did not declare the dates as national holidays at the very start, rather than declaring it at one point and amending it at another. It’s not only confusing, but it also ruins people’s schedules.