Blue Taxi: The New Babies on the Street

Last week on my wife’s birthday, I was standing along Jacinto Extension waiting for a taxi. Suddenly, a unique car approached from my left. It had an electronic signage on top, and it was painted royal blue. At first, I thought it was a new police car in Davao City. But I was surprised to see that it was a taxicab. 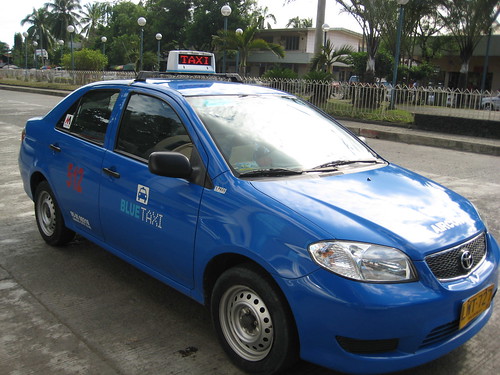 One of the four Blue Taxi cabs in Davao City

Aptly called “Blue Taxi”, these cabs are operated by the Mabuhay Group, which handles the Mabuhay Taxi lineup. There’s really nothing too fancy about this blue taxi; it just looks different from the rest. I remember way back when Maligaya Taxi started painting their cabs yellow, and it was very creative.

As what the driver told me, there are only four Blue Taxi cabs in the metro right now. I guess it’s still a “soft opening” for these blue babies.