We don’t have Burger King in Davao, so allow me to share my BK ‘encounters’ while I was in Manila. Yes, it has an ‘s’, which means plural or many – in fact, too many (for me, at least) that I cannot recall the exact number I have eaten in BK Timog during the 2 weeks that I was there.

Is food in BK so good that I have to eat often there? Well, the food is okay, but that’s not the reason. There’s a BK store just across the street from the hotel, making it the most convenient breakfast option for me.

Aside from convenience, they offer a lot of perks in their store. Imagine a store that offers free newspaper (Alright alright, Jollibee does that, too.), free Wi-Fi (Hello?! Chowking Bolton provides the same thing.), a free charging station and free hand massage (You get my point now?). Among these, it’s the Wi-Fi that I’m really after. 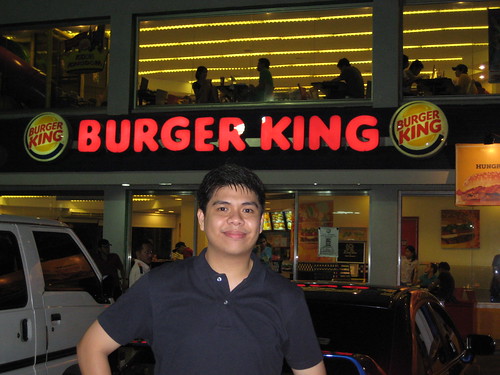 My favorite BK meal? That would be, hands down, the Ham Croisanwich Meal, which is only offered during breakfast time and priced at PhP 115. The meal consists of a Ham Croisanwich (of course), cheesy tots (the tastier cousin of french fries) and BK Joe coffee. I’m not very fond of the coffee, but the croisanwich and the tots are yummy. I even had this for breakfast for 3 consecutive days until I realized I should be trying the other meals in their menu, as well.

Other meals I have tried are the BBQ Bacon and Cheese (PhP 115), Whopper Jr. (PhP 99), Mushroom Swiss (PhP 115) and 1 piece Fried Chicken (PhP 80). Except for the chicken which comes with rice, the meals are served with fries and drinks. If you ask me, though, I can have the Ham Croisanwich over and over. Besides, that’s what BK is about – “having it my way”.

Previous A Quezon City Experience
Next A Taste of Manila's Sisig