The Pilipinas Anti-Piracy Team (PAPT), the government-led initiative composed of the National Bureau of Investigation (NBI), Optical Media Board (OMB) and the Philippine National Police (PNP), has announced that it will conduct raids and inspections against businesses and companies in DAVAO CITY starting January 2011.

It has been conducting enforcement actions against establishments reported for software copyright infringement in Metro Manila and Metro Cebu. 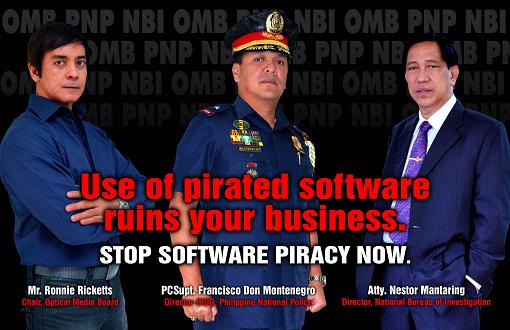 PAPT will be checking on the use of pirated and unlicensed software. The team’s ultimate goal is to significantly reduce software piracy in the country and promote respect for Intellectual Property Rights. Any violation of the Intellectual Property Code of the Philippines is punishable by imprisonment of up to 9 years and a fine of up to P1.5 million.

PAPT’s reminder: “The countdown begins. Make sure your business is ready for the crackdown.”