Days after reading it in the news, we purchased tickets to catch a glimpse of Gaisano Mall of Davao Cinema 6. Its latest attraction: recliner seats! 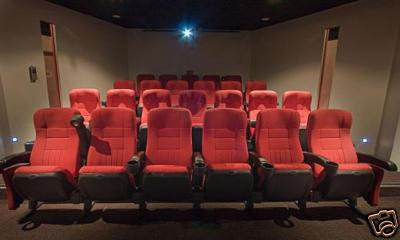 (Photo taken from this site.)

It was mildly surprising to note that the cinema offers guaranteed seats. When we bought the tickets, the ticket booth crew showed us a seating arrangement sheet, and let us choose where we preferred to be seated. It’s similar to many cinemas in Metro Manila, but with the seat plan still printed on paper. The ticketing personnel suggested the farthest seats from the screen, which we gladly accepted.

The cinema entrance looks classy. An elegant chandelier greets moviegoers before entering the theater. Its dimly lit atmosphere and deep red drapes add to the elegance of the cinema. To ensure that the experience will be something different, a large metal signage at the entrance says “VIP”. Suddenly, I felt proud for Davao City for offering this kind of movie-viewing experience.

Upon entering, we saw that the theater housed a lot less seats than the average Davao cinema. There was no second floor (or more famously known as “balcony” here in Davao), and the flooring was not too inclined. But here’s the Big Wow: insanely huge leg space! Seat rows are distanced more than a meter apart. It appears like an entire row of seats can fit in between two rows.

Now, about those recliner seats… They were pretty comfortable and huge. However, they looked similar to the cinema seats in NCCC Mall. I was hoping that the seats were equipped with built-in foot rests, but I was disappointed to learn that that they were not.

Nevertheless, the improved guaranteed seating plan and the large leg space are worth the extra P30 that we shelled out.