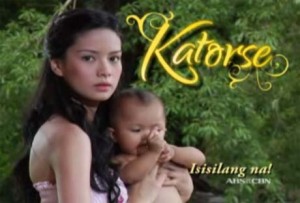 After years of playing on the sidelines, Davao pretty lass Erich Gonzales finally lands a starring role in Katorse, a new and upcoming television soap from ABS-CBN.

The remake of the 1984 film, which was topbilled by Dina Bonnevie in the plum role, will now be given a fresh perspective through Star Magic talents Ejay Falcon (of Pinoy Big Brother Teen Edition fame), Enchong Dee, and newcomer Xian Lim.

Erich’s claim to fame was her win as Grand Questor in Star Circle National Teen Quest a few years ago. Although she was born in Cebu, she grew up and attended school in Davao City.

Here’s the TV trailer for the Katorse remake: