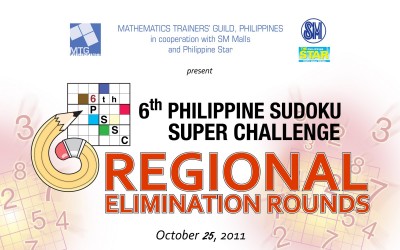 There will be three categories: Sudoku Whiz Kid for elementary level; Sudoku Wizard for high school level and Sudoku Grandmaster for college level and professionals. Registration is free.

Sudoko enthusiasts must answer and submit at least 20 original cut-outs of Sudoku puzzles published after September 1 in the Philippine Star to the nearest MTG center coordinators not later than October 25.

Regional eliminations in Davao will be held at the SM City Davao Event Centre on October 25. The top 3 Sudoku challengers in the Davao eliminations will receive Certificates of High Distinction and are qualified for the National Finals at SM North EDSA on January 28, 2012.

Entry forms may be downloaded from www.pinoysudoku.ph.