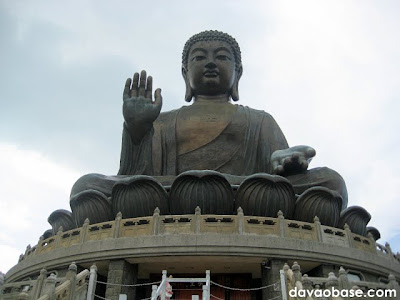 It is a must for any tourist to visit a local religious location before setting off to the rest of the vacation hot spots. That is why our first destination in Hong Kong was the famed Giant Buddha in Ngong Ping, Lantau Island.

Armed with our trusty Hong Kong map (which we conveniently grabbed from the HK International Airport free of charge), we took the train (Mass Transit Railway) to the Central Station via the Tsuen Wan Line. We then walked to the Hong Kong Station, and took the interchange route to the Tung Chung Line.

We were supposedly going to ride the Ngong Ping 360, which is a cable car that will take us to the Giant Buddha and treat us to a scenic view of the Ngong Ping highlands. Unfortunately, because of Typhoon Juan / Megi steering its way to Hong Kong, all cable car rides were suspended on that day. 🙁 So we pursued Plan B, by heading to the nearby bus terminus and taking the New Lantau Bus No. 23 to Ngong Ping. 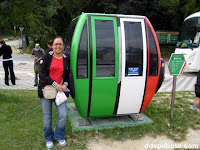 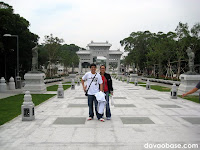 Upon arrival, we were greeted by a wide open area of white cemented pathway going to the arch entrance of the Giant Buddha (also called the Tian Tan Buddha). The view was spectacular! It was a very windy day at about 22 degrees Celsius, so it was a very cool and refreshing welcome.

Unfortunately, reaching the base of the Giant Buddha was no joke. We had to endure walking 268 steps to arrive at the Buddha’s feet! But after a long and exhausting climb, the view was definitely worth it. We got to see the details of the huge statue, enter the lotus flower altar directly below the statue, and appreciate the Lantau Island peaks from afar. 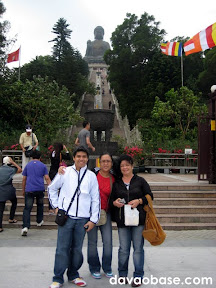 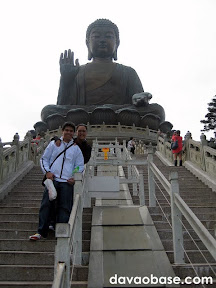 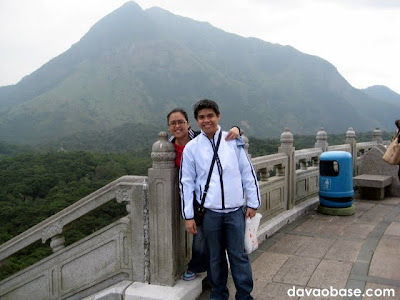 The Giant Buddha in Ngong Ping proved to be a great first stop for our four-day Hong Kong vacation. 🙂