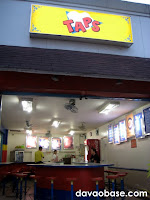 As far as my childhood memory takes me, Taps has been in the business of serving hot breakfast meals in Davao City. Owned and operated by the Lizadas, the fast food outlet has rooted itself into the hunger pangs of Dabawenyos for decades. Despite the birth (and fallout) of dozens of restaurants, Taps is still in the hearts of local residents.

Taps offers an overwhelmingly long list of rice meals to choose from. Name it! They have practically every type of fried breakfast food on their menu. All plate meals are served with fried rice (sinangag) and egg (itlog).

While the king of the Taps meals is Tapsilog (beef tapa, sinangag at itlog), my favorite has got to be Lekasilog (lechon kawali, sinangag at itlog)! Forget your cholesterol level for a while, and just savor the juicy goodness of deep-fried pork belly slices with hot garlic rice and fresh fried egg. Yummy! 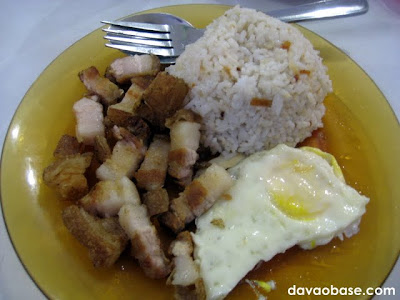 Taps serves daily in several branches around the metro: