I remember hearing Jesuit songs from my eldest sister’s room on a daily basis, when I was still in high school. Some early noteworthy Jesuit albums that I have heard are The Best Of Himig Heswita, Hangad, and Far Greater Love.

It was only when I stepped into college that I learned why I have come to love their music portfolio. Aside from the uniquely uplifting melodies, Jesuit music has kept its fire burning, through a group of musically-inclined priests from the Society of Jesus. One of the composers turns out to be my second degree cousin, Fr. Arnel de Castro Aquino, SJ. 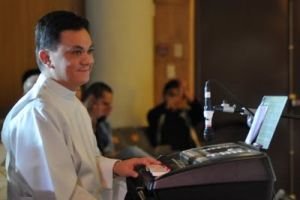 Fr. Arnel dC Aquino SJ wrote “Pagsibol” and “Ito Ang Araw” while at Sacred Heart Novitiate, and began another tradition of Jesuit Music for Meditation with the LAUDS series. He studied classical piano for twelve years in Davao City where he was born. He began in music studies when he was in second grade and was actively involved in the choir of the Ateneo student Catholic Action as a “teacher”, conductor, flutist and guitar accompanist. Arnel, infers predominantly from the work of David Haas and Dan Schutte for the liturgical music he has recently been creating. Arnel has his chief achievements has been his albums – Lauds I- VI his performance on the keyboard has generated some of the most memorable and inspiring religious instrumental music this side of the world has heard. His dream is to be able to arrange Jesuit liturgical music for a symphony orchestra and to conduct a one-hundred-voice choir.

Fr. Aquino has been sharing scriptural thoughts and church preachings through his magnificent music. I hope his penchant for music continues to inspire people. Thank you for the music, Kuya Arnel!