"Believe That Peace Happens When You Care"

I am from Davao City, where people live in safety despite being a part of Mindanao. But as a Mindanaoan, as a Filipino, as a person, I feel for the people in war-torn areas. The long standing question on who wins and who loses in wars has long been a subject of debate. I guess we still don’t have the answers. If we do, then we probably won’t be losing too many innocent lives – leaving wives without husbands and children without parents.

I received this ad from the Ayala Young Leaders Alliance, which is the alumni network of the Ayala Young Leaders Congress organized annually by the Ayala Corporation. I was in its very first batch. I have to admit I have not been very active with the group during the past years, but it is with deepest sincerity that I join the Ayala Foundation in this cause. I would like to share this poster with everyone who cares. 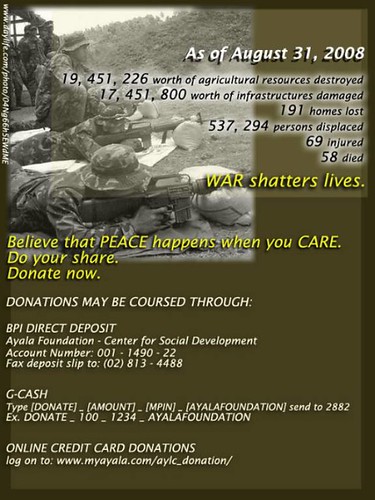 Previous Was There An Oktoberfest Kick Off Party In Davao?
Next Davao City Hotel Directory (Part 1)